Boston and His Tooth 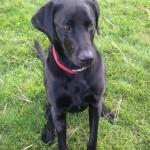 Boston is a big black Labrador Retriever with a lot of energy.

Boston’s mom and dad gave him a bone to chew on about three months ago. (Believe me, they really regret that call right now!). Boston gnawed on the bone and… he ended up with a broken tooth on the upper left side of his mouth. It was the big chewing tooth, also called the carnassial tooth.

A broken tooth is painful and it allows bacteria to enter the tooth canal and set up an infection, or an abscess. An abscessed tooth is VERY painful, as you well may know 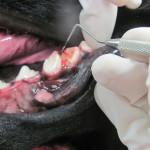 The only treatment for a tooth root abscess is to have a root canal procedure or to have the tooth extracted. Boston’s owners chose extraction.

Under general anaesthetic, Boston, had an x-ray taken of his tooth. The broken tooth has three roots and one of them had an abscess at the tip.

The veterinarian injected local anesthetic around the nerve to the tooth to numb the area and prevent any pain. The doctor then made an incision around the tooth and made a gum flap which she gently lifted off the bone. Because of the three roots, three cuts of the tooth had to be made. This was done with a high speed cutting drill. 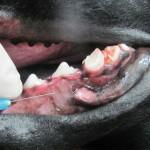 Each root was treated as a separate tooth and all three were extracted with a combination of elevation, leverage, enough pressure, and removal of some of the surrounding bone in the socket. Three roots came out clean! 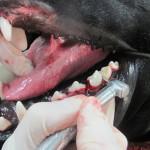 Starting to drill the tooth into 3 sections 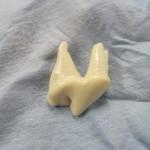 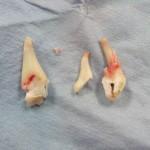 The 3 roots of the tooth successfully extracted

The sharp bone edges were burred smooth with the drill and the gum flap was put back in place and sutured. The stitches were absorbable material and they will keep the gum tissue in place until it heals; then they will dissolve and fall out on their own.

After all of the sutures were in place, the veterinarian used a Therapeutic Laser to help with inflammation, healing and pain. 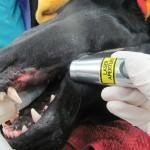 Using the Therapeutic laser on the extraction site

Boston has to take antibiotics for about 10 days, and he was sent home with extra pain medication. His owners were instructed to feed him soft food for about a week to allow the tissues to heal.

What will happen next? Boston’s mouth will heal up and he’ll have a gap in his dental pattern on the top left of his mouth. He will be able to eat hard food just fine after a few weeks. He will miss that big tooth and will likely not want to gnaw on things on that side of his mouth anymore.

His mom and dad will need to brush the tooth below carefully and watch for build-up of plaque in that area from now on. Most importantly, Boston should stay away from chewing on really hard objects like bones, rocks, and antlers. He doesn’t need another broken tooth!

I know this isn’t easy. Dogs like to chew bones. Chewing keeps their teeth clean and gives them something to do. But teeth can only take so much and then they will break.

And have a look in your dog’s (and cat’s) mouth once a week. Flip the lip. Have a good look around, including the back teeth.

That’s Boston’s story. He’s back to eating and running around … and he’s definitely banned from chewing on bones! 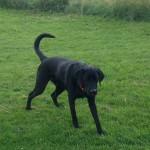